Author: Roland Kuit
If you like to play with these patches, you will need the Clavia NMG2 Demo version. You can find it here:

Clicking the pictures will download the patches into the NMG2 Demo.

Shepard tone, named after Roger Shepard, is a sound consisting of a superposition of sine waves separated by octaves. When played with the base pitch of the tone moving upward or downward, it is referred to as the Shepard scale. This creates the auditory illusion of a tone that continually ascends or descends in pitch, yet which ultimately seems to get no higher or lower. It has been described as a "sonic barber's pole". The acoustical illusion can be constructed by creating a series of overlapping ascending or descending scales.

Boolean logic, originally developed by George Boole in the mid 1800s, allows quite a few unexpected things to be mapped into bits and bytes.
The great thing about Boolean logic is that, Boolean logic  is very simple.
Logic Gates: NOT, AND, OR. And combinations with these three to create: XOR, NAND, NOR and XNOR.
With these simple gates you can build combinations that will implement any digital component you can imagine.
In modular synthesis we are used to logic as a trigger function. Simple ON/OFF circuits out of sequencers triggering envelope generators etc.
In my eBooks I explain how to build very complicated sequencers. The patch we will discuss below is quite simple and we will apply logic in an other way. The other side of logic, so to speak.
In this lecture you will learn how to build an oscillator, LFO etc. in order to create a sound producing device!
As you might know, an oscillator is a device switching from the highest amplitude to the lowest. Repeatedly. A logic inverter that switches positive to negative and vice versa. The simplest possible gate is called an "inverter," or a NOT gate. It takes one bit as input and produces as output its opposite. The truth table below shows a logic table for the NOT gate. Symbolized as follows in circuit diagrams with "Q" as output:

Connecting the output to the input we create a loop. It produces sound. Audio on a 96kHz rate. The frequency is a bit high to work with so we have to find a way how to tune it.

A Logic Divider module is practical however it is a little static and of no use for our purpose. As we want to create an oscillator whereby we can modulate its pitch. Using a Logic Delay module offers us the opportunity to tune the audio frequency in a controlled way:

The Inverter module is switching from 0 to 1 in a loop with the Delay module. Increasing the delay by turning the knob will cause a slower loop and therefore a lower frequency. A more elegant way is to use a Constant (''Tune'')  module: 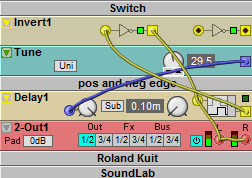 We can use the the Sub/Low/High button, but we don't. We use the Delay Type drop-down selector instead. Select Delay Type between Positive Edge Delay (only the positive edge of the input signal is delayed), Negative Edge Delay (only the negative edge of the input signal is delayed) and Cycle Delay (the entire input signal cycle is delayed). We have created a autonomous logic oscillator with a modulation input.* The Constant module is modulating the frequency. Next step: Creating a LFO with a ramp wave. Before we can create this we will have to understand some other logic gates. The AND gate:


The AND operation says if and only if all inputs are on, the output will be on.
To show you a NAND gate we need combinational logic.
The logic ladder form would be an AND gate, followed by a NOT gate:

The logic truth table for this would be: 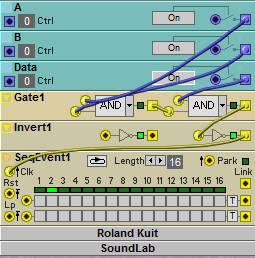 When we use the drop-down selector we can choose the NAND gate directly. A combination of NAND gates can form a Flip-Flop module.

The flip-flop is a circuit that has two stable states and can be used to store state information. The circuit can be made to change state by signals applied to one or more control inputs and will have one or two outputs.
It is the basic storage element in sequential logic constructed with three NAND gates** : 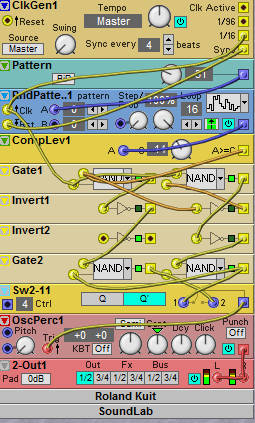 A Clock Generator triggers a Pattern Generator. The Compare Level module generates a trigger signal as data signal triggering a Percussion oscillator. We need this Flip-flop device to create a BinCounter module. That is a digital circuit which has a clock input and a number of count outputs which give the number of clock cycles.
A sequential row of Flip-flops can form a Binary Counter. 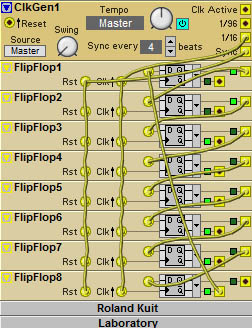 As a modulation source for an oscillator by a DAConverter module:

We can follow the trigger decay in a sequence through all Flip-flop modules.

8 Flip-Flop modules whereby the Q2 output is the input for each Flip-flop own D=input.
Q1 acts as trigger for the previous Flip-flop: 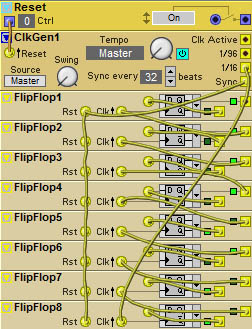 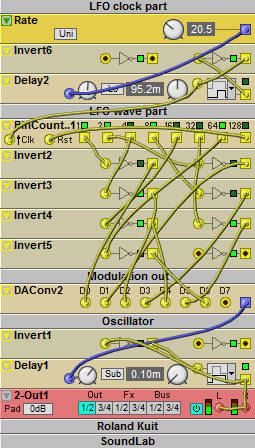 The delayed Logic Inverter loop is triggering the Binary Counter module as a Clock Generator. Output 8 is resetting the module. The outputs are inverted in such way to get a ramp up wave.
The Digital to Analogue Converter module transforms the logic input into an analogue modulation signal. A pitch modulating LFO wave for the Logic Delay module which is in a loop with the Logic Inverter to create an autonomous logic oscillator.

All we need to do is to copy the LFO block with oscillator. We delay the trigger to the second oscillator by a Logic Delay module to create a phase difference. Pushing the reset button will restart both BinCounters. The second BinCounter restarts in an other phase created by a Logic Delay module.
To minimize the output of the LFO, we leave out the D0 and D7 input of the DAConverter. 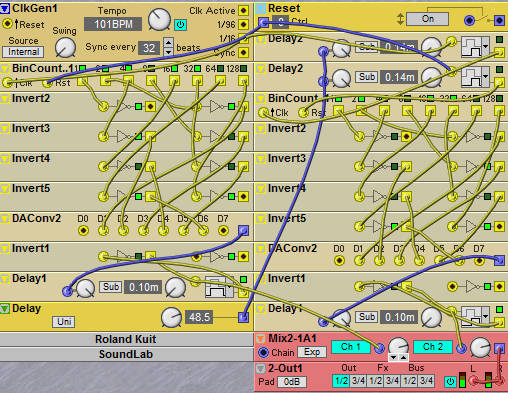 Extending the patch above results in a four phase Barber's pole:

Push the Reset-Button in order to get the right phase.
Additional we apply a High- and Low Pass serial filter circuit to smooth the output.

A more elegant way to create a digital Barber's Pole is to make use of Shift Register modules.
A shift register is a cascade of flip flops, sharing the same clock, in which the output of each flip-flop is connected to the "data" input of the next flip-flop in the chain, resulting in a circuit that shifts by one position the "bit array" stored in it, shifting in the data present at its input and shifting out the last bit in the array, at each transition of the clock input. More generally, a shift register may be multidimensional, such that its "data in" and stage outputs are themselves bit arrays: this is implemented simply by running several shift registers of the same bit-length in parallel.**
The phase difference is created with Shift Register modules: control data delays of the LFO's modulation wave output.
Without the inverters the LFO's output causes a downward modulation signal.

This is just one example. Understanding Boolean logic provides many new possibilities to design today's sound.

Roland Kuit
This little lecture designed to use with your internet browser (screen width 1243). Start with installing the NMG2 Demo software, located in the file Clavia software for PC/Mac (Leopard user have to install VMWare, or Parallels and a Windows version). For OSX Lion: Step 1 Download and install WineBottler. Step 2 – Install. Once installed WineBottler, go where you saved G2 Demo installer, unzip it and double click“ SetupModularG2Demo_V140.exe”. A window will pop up asking what to do with that file. Select “Convert to simple OSX application” and click OK. In the next window, scroll down Winetricks list and check “winxp” option, then click INSTALL. On “Save As” dialog window, name your application as “Nord Modular G2 Demo”, select “Applications” as target folder and click SAVE. Now WineBottler will start to install the software and a new window will pop up with the old beloved windows installer. Go on with installation and, when a window with a directory tree will show just close it and complete G2 Demo installation following screen instructions. Now WineBottler will ask you which file should be started. Select “Modular G2 Demo v1.40.exe” from the list and click OK. Now you will find your packed software under “Applications” in your Finder. Unfortunately, seems that this software won’t work as packed wine application so you will need to do a further step. Go in your “Applications” folder and delete the app you just created (Nord Modular G2 Demo), then go to: /your_user/Library/Application Support/Wine/prefixes. Here you will find a folder named “Nord Modular G2 Demo” with all installed files under: drive_c/Clavia/Modular G2 Demo v1.40. From there just drag the executable file to your “Applications” folder holding CMD+OPTION to create a link and rename it as “Nord Modular G2 Demo”. Open the NMG2Demo and click the dropdown menu Setup. Select the appropriate soundcard and  put the sample rate at 96000.